Not an end-- just a shift

After careful deliberation, it has been decided that one blog will be sufficient for the Clark Library. I have had a lot of fun with Cartographic Curiosities, and hope that you have, too.

Please remember to check out http://clark-library.blogspot.com/ for more interesting maps, as well as visualizations and news from the Clark Library!

The blog is dead! Long live the blog!
Posted by Caitlin at 1:30 PM No comments:

In case you missed it, Google Maps had a lovely April Fools Day feature called Quest, which gave their maps quite a makeover. Here's Michigan: 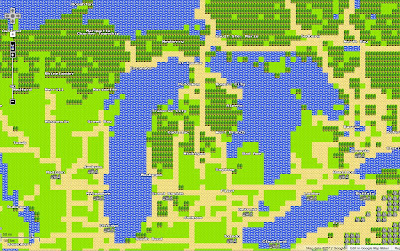 As someone with a healthy dose of nostalgia for early RPGs, I absolutely loved the new art, as well as the 'commercial' that Google made. 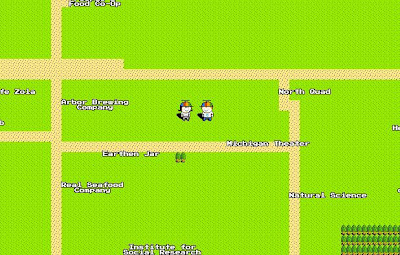 Those two figures in the rainbow beanies watching beatifically over the city are the symbol that Google put to represent their Ann Arbor office.

The StreetView feature also got quite a bit more pixellated, as can be seen in this screenshot of the Michigan Theater on Liberty: 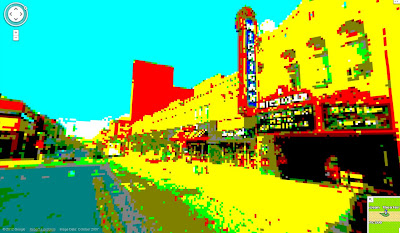 The StreetView character was decked out in armor, as every good adventurer should be (safety first!):

There are also plenty of Easter eggs hidden around the world, like this one of Area 51: 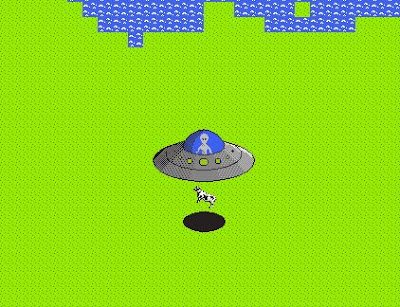 Check out more cool Easter Eggs here, and explore the 8-bit glory of the map for yourself here (it's no longer available on the Google Maps main page).

Have you ever been frustrated by your internet speed, or worried about attack traffic on the internet? Well, thanks to Akamai, owners of a cloud platform that all of us have likely used at one point or another unknowingly, you can see real-time maps of network attacks, internet latency, and network traffic.

Here's what the attack map looked like just moments ago, with a zoom-in on the continental United States: 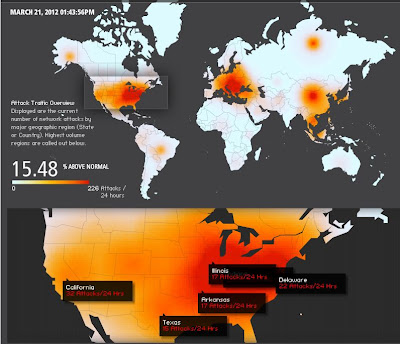 As you can see, the overall number of attacks is about 15% higher than usual. California has suffered the most attacks in the past 24 hours, with 32. Not surprising, due to its high population.

To make this map, Akamai collects data on the number of connections that are attempted, the source IP address, the destination IP address, and the source and destination ports. The packets captured, they say, are generally from automated scanning trojans and worms looking to infect new computers scanning randomly generated IP addresses.

These maps are updated in real time, so check them out here however frequently you'd like.
Posted by Caitlin at 2:12 PM No comments:

James Bridle created Rorschmap to explore what happens to maps once they leave the static medium of paper and become digital entities. It's really disorienting at first, but quite hypnotic and entertaining.

Here's a screencap of our very own Ann Arbor, Rorschmapified! 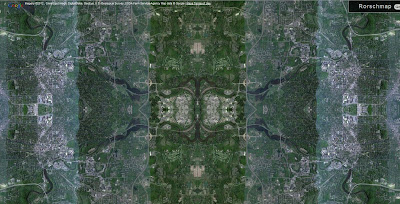 Read more about Rorschmap here.
Posted by Caitlin at 11:34 AM No comments:

Geothermal energy potential in the U.S.

Over the span of three years, Google's philanthropic arm, Google.org, supported a project run by the SMU Geothermal Institute intended to map out the potential for geothermal energy use in the United States. Below is the result of their research. 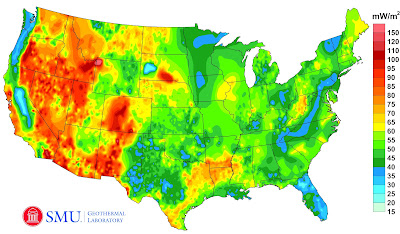 This map incorporates tens of thousands of new data points measuring the potential of Enhanced Geothermal Systems, and is the most comprehensive map of such data to date. There is a wealth of untapped geothermal energy in the nation's ground, just waiting to power our houses!

We all know and love art on maps, from monsters lounging in the sea to vignettes showing Roman gods and goddesses. But most of that art seems to exist on older maps, saved from a different time. Where is the art in maps today?

Matthew Cusick thought that maps today had their own kind of beauty, though they are often not illustrated like older maps are, and decided to turn the maps themselves into collages.

Here's a close-up of one of his collages: 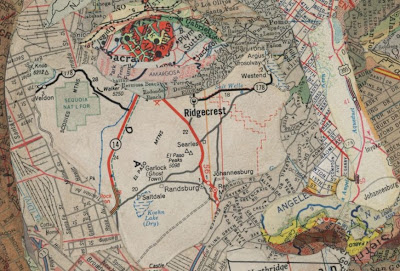 Part of me admires his handiwork and the beauty of his final product; part of me mourns the cutting up of maps to make the art. Since maps started being mass-produced, I suppose it's not as much of a deal... And I guess you can't make a map omelet without breaking a few map eggs, right?

The Map Library here at the University of Michigan has fused with Government Documents and the Spacial and Numeric Data Labs to reveal their ultimate final form: the Stephen S. Clark Library.

We're excited about the new blog, all integrated and shiny! Please follow along!

Of course, we will still try to whet your appetite for pure map-related goodness here, but the Clark Library blog will have all sorts of data visualizations and the like that you might also find interesting.

http://clark-library.blogspot.com/
Posted by Caitlin at 1:36 PM No comments: