The United States of Pig

W.E. Baker was a pure-food proponent who lived in Massachusetts. He believed that unsanitary conditions in food production led to disease-- therefore, he opened his very own Sanitary Piggery to show the rest of the world how swine ought to be raised. In July of 1875, he threw a grand party both to celebrate and raise awareness for his new Sanitary Piggery and to commemorate a battle that had been fought nearby.

You can't have a fancy party without fancy party favors (at least, not if you're doing it right), so Baker distributed these maps as ‘good cheer souvenirs’ to his guests, who numbered in the thousands: 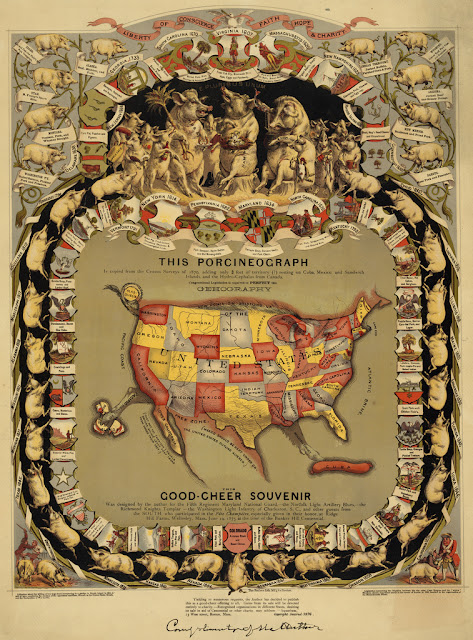 The map’s full title is: THIS PORCINEOGRAPH is copied from the Census Surveys of 1870, adding only 3 feet of territory (?) resting on Cuba, Mexico and Sandwich Islands, and the Hydro-Cephalus from Canada. Congressional Legislation is required to PERFECT this GEHOGRAPHY.

It seems as though Baker might have been in a rush to get these piggy maps ready for his guests, because there are a few typos, some reversed text, and what seem to be notes to improve future drafts of the map.

Around the map are pigs representing each state, next to a banner with a pork recipe for each state. Michigan's is "Superior White Fish and Larded Sweetbreads."
(It's impossible to read while it's this size but this page has a wonderful detailed version of the map that you can zoom in on.)

Read more about the map here.

Side note: We have an actual print of the Porcineograph at U of M's very own Clements Library!
Posted by Caitlin at 5:02 PM